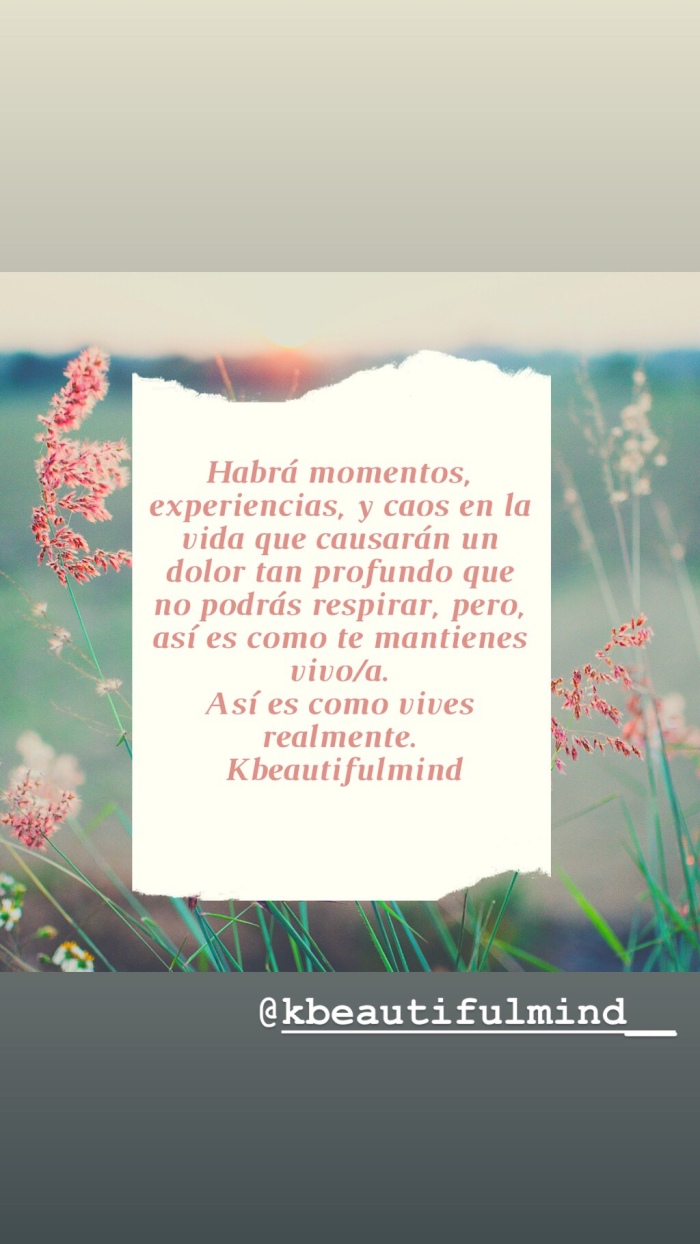 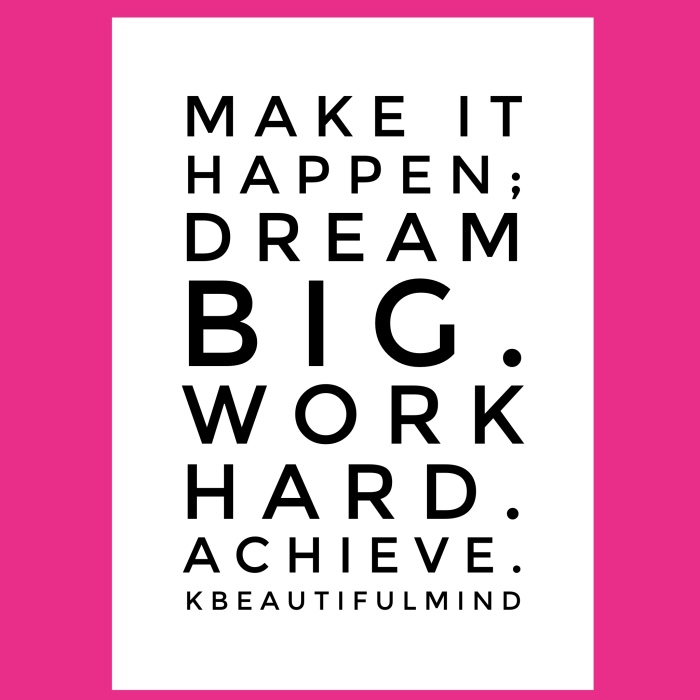 I’d to take this moment to thank you all for reading my work, for being fans of what I write and believe in since I created my blog.

I’d also like to address that I’m working on writing more this year, expanding my words to touch more lives, and to share that I have some new and fun exciting project ideas on the way!

I’ve decided to create a “Professional Instagram” page, were I’d like to expose my poetry, quotes, short stories, advise through my knowledge, and display my soon to come videos or audio recordings!

I hope you all will follow and join me in this exciting journey!

You can strive for success all you want…Yet, if you lack of goodness, a humble characteristics, or have emotional imbalance baggage you have yet to deal with… failure might be more in your favor.

Be good, and receive good.

Be ugly, and watch as karma addresses you.

When all my dreams come true, the only one I want next to me is you.

The one I want to share my success with, is you.

There is so many important keys in achiving to be independent.
One of my favorite is the strong trust you build with yourself.
You see, as you gain your independence you learn to trust yourself again, and as you accomplish this…
You begin to see how beneficial it is to listen to the voices inside yourself to guide you over the berating opinions of others that simply don’t matter.
-Kbeautifulmind

The thing with life, is that you can’t always control what it throws at you.
Sometimes you just have to accept it, face it, try to find the solution, and deal with it.

“The key to survival is building a rich life.” -Kbeautifulmind

Now, I don’t mean becoming financially rich. Even though having good finacial stability can help with the finacial issues…
However, having all the money in the world doesn’t necessarily mean you live a “rich” life.

What I mean by this is being a “rich” human being.

Being a person who grabs the ugly life throws at them, and still finds beauty.

Being a person who is not dependent on others to make their day, or holds them responsible for their view on life.

Being a person that may feel down at times (because lets face it, it’s human nature) but, can get right back up and fight on.

Life is a struggle, but if you are “rich” you have found the key and comfort to survive in this world.

If you don’t love yourself, believe in yourself, and most of all trust yourself in the environment you live in…

then almost anything you have to face will bring you down to the point of self destruction.

“The key to survival is building a rich life.”

To be internally happy and feel rich with just who you are and what you have to offer.

If you live a rich life…

could allow you to become dysfunctional.

Because you are rich.

The other day I had a conversation with a friend, and she was sharing something with me. In the convo she stated that her significant other had once told her…

“I love you, because you make me a better person.”

So after we hung up, I got to thinking and I went back in time for a bit.
I thought of the two serious relationships I’ve had, the little ones I’ve had and even back to my first boyfriend I ever had.
I thought of them all… one by one.
I found myself wondering if they ever made me better?
or
If I ever made them better?

Of course the first boyfriend and little relationships before my junior year were more of a… joke?
I don’t know if that’s the proper word? (I don’t want to sound mean)
But, they weren’t serious at all, we were kids, or they weren’t long enough to be anything.

However, I did think of one person I dated or “talked” to in H.S, and I can definetly say he made me “better” or had a positive impact in my life.
He was a Senior and I was a freshmen, and he had it all together. He knew what he wanted out of life, and just what he had to do to accomplish his goals.
He was an athlete and very involved in other school activities.
Even though our relationship only grew into a friendship, I continued to learn a lot from him.
I can honestly say that after him…
I began to really jot down my career ideas, what I wanted out of life, and how I was going to accomplish it all.
and till this day…
We are actually still friends, we always check up on each other, and he is currently attending Medical School.
He has always been a true inspiration.

However, I couldn’t get myself to find an exact thing that made me better while I was in any of my relationships…
and I honestly don’t think I ever told any one  “You make me a better person.”

But I knew that it didn’t mean they didn’t, I spend a long time in two serious relationships so there was something that definetly kept me there.

The first serious one will always be the most caring, and sweetest relationship.
He was my highschool sweetheart.
And even though I always wanted more “us” and less “us and friends…”

He was honest, loving, and truly loved me unconditionally.
We were just on different roads for the future, and different ideas on what we wanted.
I guess you can say our maturity levels drove us apart.

After it ended…
I could probably say he made me caring, and if I took anything from this…
would be that he made me know exactly HOW I want to be loved and how I DESERVE to be loved.
The love was true and pure.
We were just kids, but I know it was real.
and I rememeber him saying…
“Someday you’ll KNOW my love was true.”
and that someday definetly came.

The second one, well…

It helped me find my cultural identity.
One good thing is that, I learned how to love my roots and to really enjoy where I come from.
We shared the same religious believes, he turned up the Spanish music when it was on the radio, our conversations were never boring, and we had a lot of similarities…
It felt like “home.”
But the lies ruined it.

After it ended…
I call this one “The best thing I never had.”
It made me realize how important my independence was to me, and it taught me what I don’t want in a relationship. It opened my eyes to see how important honesty is to me, as well as team work.
It also made me realize that in my hectic life, there was no room for weakness, insecurities, and fear.

The two lovers were very different, but together they did make me better. Through the good and all of the bad…
Thanks to them I learned exactly what I want in a romantic relationship, and even though one had more good than the other they both taught me a lot.

My next question was, did I make them better?

Well, it wouldn’t be fair to sit here and be conceded and say that I did…

“I’m the best thing you ever had!!”
Lmfao Just kidding!

But I do rememeber being told that I did, and remembering that was very pleasing.
I remembered all the times I shared with both of them and how I encouraged them to never give up on their education, to strive for more, to be positive, etc.
I rememeber the first guy wrote an essay for school about me and how much of a positive impact I had in his life.
(I still have it, in my “Highschool Memory Box”)
He laminated it and gave it to me.

The second guy said it a couple times, but then again when it ends so bad you can’t help but wonder what was true and what was a lie?
But with this guy, I know I did a lot for him, because I might have tried a little harder. I learned from my first relationship that I use to give up to easily.

Anyway, after that conversation and thinking back to my previous relationships…
I realized something…

I realized how important it is to be with someone that makes you better.

I think as people we tend to get mesmerized by the “potential” or “idea” of the person.
I think, we forget that the bonding of two people isn’t all about the looks, or the “spark” you felt when you first looked into their eyes.
The bond of you and someone else should make you a better man/woman, than you already were when you were with out them.

He/she should naturally motivate you to succeed, and accomplish your goals and dreams; instead of holding you back.

He/she should be willing to be a part of a team with you, so that you guys can build a strong empire… TOGETHER.

He/she should make you feel lo

ved, appreciated, and comfortable in your own skin.

He/she should make you want to tell them…
“You make me a better person.”
-Kbeautifulmind